How do we honor Black history and experiences beyond the month of February? Do we spotlight the contributions of Black workers, scientists, organizers? Do we grapple with the systemic underpinnings of racism woven throughout our institutions and social structures? Do we start small by looking at ourselves, and our often-overlapping roles within systems? Do we work to bolster anti-racist practices and organizations, and work to dismantle disparities?

How can we do all of these, in this moment and indefinitely? 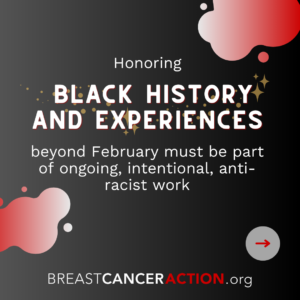 In honoring Black history and experiences, Breast Cancer Action will draw the connections between each of these tactics and practices. We’re reflecting on the life of Henrietta Lacks, racism in medicine, disparities in breast cancer, and how anti-racism must be present in all of our internal processes and external stances, as we approach the launch of our 2022 Strategic Plan, titled: “Our 5-Year Strategic Vision: A Radical Strategy for Addressing and Ending Breast Cancer through a Health Justice Lens” set to be released this Spring.

We do not want to be another organization that merely “recognizes” it is Black History Month. Similar to our take on “awareness,” we know that by now people “recognize” that Black History Month exists, just as they are well “aware” that breast cancer exists. And, as an ACTION organization we acknowledge that the work of being anti-racist involves the intentional, active centering of BIPOC folx and their experiences and the decentering of white supremacy, racism, capitalism, patriarchy, heterosexism/heteronormativity, ableism, etc., and the ways in which these show up in ourselves, practices, institutions and systems.

To do this work, BCAction goes beyond recognizing Black History Month as just a moment in time by honoring our history and acknowledging it. We will examine how we, as an organization, actively decenter problematic, harmful, and oppressive practices, and re-envision how we work to address and end breast cancer using a health justice lens, knowing that health justice work is anti-racist work.

How do we begin to build trust in science and healthcare? We, as an organization, do not have all of the answers, but we do know that one of the first steps in building trust is to acknowledge our history, especially when that history has caused hurt, harm and death.  We know that our history is rooted in the lives and the painful mistreatment of Black people. And we believe in the power of telling our stories in helping us move forward, especially when those stories provide insight into how we might approach systemic problems and create disruptive solutions toward the goal of living healthy and liberated lives. 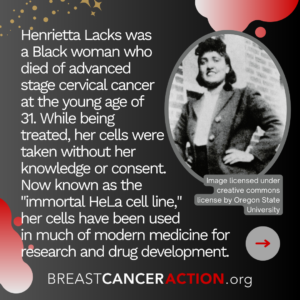 Henrietta Lacks was a Black mother of five who was born in Virginia and lived in Maryland after she married. In 1951 at the age of 31 she presented to John Hopkins Hospital because she felt a knot in her womb; at the hospital it was discovered she had aggressive cervical cancer. At the time, John Hopkins Hospital was one of only a few hospitals that would treat Black people.

According to a piece on Lack’s life and legacy by Nature, doctors at the hospital “had taken samples of her cancerous cells while diagnosing and treating the disease. They gave some of that tissue to a researcher without Lacks’ knowledge or consent. In the laboratory, her cells turned out to have an extraordinary capacity to survive and reproduce; they were, in essence, immortal. The researcher shared them widely with other scientists, and they became a workhorse of biological research. Today, work done with HeLa cells underpins much of modern medicine; they have been involved in key discoveries in many fields, including cancer, immunology and infectious disease. One of their most recent applications has been in research for vaccines against COVID-19.” Cells taken from Lacks are known as HeLa cells, and one scientist has postulated that “if you could pile all HeLa cells ever grown onto a scale, they’d weigh more than 50 million metric tons — an inconceivable number, given that an individual cell weighs almost nothing.”

Following her historic visit to John Hopkins Hospital, Lacks died from cervical cancer at the shockingly-young age of 31. Upon partial autopsy, it was discovered that her cancer had metastasized throughout her entire body.

In addition to John Hopkins being one of only a few hospitals that treated Black people at the time, Lacks’ genetic material was taken without her knowledge and without her consent. The profits generated by the myriad drugs created by biotech companies through research on HeLa cells, including drugs for treating herpes, leukemia, influenza, hemophilia, and Parkinson’s disease, were never shared with the Lacks family, revealing the inextricable links between the harms of racism and the structures of capitalism. Additionally, per Nature, “for decades after her death, doctors and scientists repeatedly failed to ask her family for consent as they revealed Lacks’ name publicly, gave her medical records to the media, and even published her cells’ genome online.”

Righting the wrongs of the past begins with naming them and reckoning with the reverberating generational impacts. As Dr. Redman outlines in the aforementioned piece, “Restitution and reconciliation cannot be thorough without an acknowledgement of injustice. An effective intervention would demand building trust and being painfully honest about the historical and current mistreatment of Black people by the healthcare and scientific community as a whole.”

In a companion piece also by Dr. Redman entitled, “Are You Really Ready to Build Trust?” Dr. Redman explains, “The building of trust is a long-term goal and can only be achieved through consistency in truth-telling, honesty, listening, decentering of privilege, naming and addressing inequitable power dynamics, and much more.”

Disparities in Breast Cancer and Anti-Racism in our work

Dr. Redman outlines, “Breast cancer disproportionately affects Black women, especially when it comes to age at diagnosis, stage at diagnosis, and how likely they are to die from it. The matter is made even worse by the limited information we have about metastatic breast cancer–which also disproportionately affects Black women. Despite being the worst affected population, the participation of Black women remains under-represented in clinical trials and there is a persistent racial gap in funding for breast cancer research.”

As a child, Lacks worked as a tobacco farmer, and spent time in the fields to support her family after dropping out of school in the sixth grade. If environmental racism is a leading cause of cancer-causing chemical exposures now, it was certainly no better in the South in the 1930s. What kind of environmental exposures was she subjected to as a result of systemic racism and the practices that sustain it including redlining and racist zoning practices, that could cause metastatic cervical cancer by the age of 31? The 1930s are also when synthetic pesticides were first used. Could Lacks have faced environmental exposures at the hands of this newly-burgeoning and at that point completely-unregulated industry?

We cannot address cancer, and breast cancer specifically, without taking seriously the chemical exposures, environmental racism, and the healthcare disparities that contribute to this public health crisis.

In the work of our organization, anti-racism therefore is not an afterthought, or an additional lens through which we examine social and public health structures. It is a foundational methodology that must be ever-present in all that we do, internally in our processes, and externally in our strategies, tactics, and goals.

As public health advocates, we are not outside observers of the medical-industrial complex— we are part of this system—and our roles within the system are one of the many intersecting identities we each hold. A social justice approach was part of our organizational fabric when we were founded in the 1990s, and in 2022 our organization will be even more intentional about starting with ourselves, analyzing our processes, our culture, and our priorities, and bringing a heightened social justice and anti-racist lens to the breast cancer movement. We know that in order to do this work, we have to first examine our own values and structures. This year we will be re-envisioning our strategic plan to create a blueprint for how we will show up in the movement and the world, prioritizing centering those with the furthest relationships to power, and operationalizing anti-racist values more fully, both internally and externally.

It is uniquely interesting that the story of Henrietta Lacks, which prompts us to grapple with systemic racism, blatantly debunks anti-Black racism. Racism is a false system of belief that uses perceived differences in racial characteristics to segment and hierarchically categorize groups of people, distinguishing groups as distinct from each other, and inferior or superior to each other. In reckoning with this system of beliefs based on false notions of superiority, when learning of the impacts of Lacks’ cells that were “in essence, immortal,” it is difficult to not focus on the objective superiority of her biology.

Science uses the “immortal HeLa cell line” as the ideal cells from which to execute research and from which to provide life-saving and life-changing treatments for people across the world. These are the cells of a Black woman.

Though the medical industrial complex has begun to grapple with the harms done to Henrietta Lacks and her family, including a post on her legacy by Johns Hopkins Hospital, another aspect that has not intensified throughout this reckoning is the rage over her death – at age 31 from advanced stage cervical cancer.

At Breast Cancer Action, our righteous anger at the deaths caused by cancer fuel the fire of our activism. How many strong, powerful, history-changing womxn and people will be lost at the hands of often-preventable diseases?

The intersections of racism, environmental injustice, and the foundational system through which both of these factors flourish – capitalism – will not be uninterrogated in how we address and end breast cancer. Our anger is powerful, and our disbelief over the large-scale inaction on a disease that is killing so many of us, and disproportionately killing Black women, will drive our work forward.

Breast Cancer Action will be releasing a graphic preview of our 2022 Strategic Plan early this month, as well as our full Strategy Map this Spring. As we outline how we seek to carry out our mission and vision going forward, we intend to do what we have outlined here as a way of honoring and acknowledging Black history and furthering the truth-telling of BIPOC experiences: focusing on personal stories, centering those with the furthest relationships to power, providing critical analysis of systems, offering structural solutions, interrogating our own roles and processes in being anti-racist, and dismantling disparities, in order to get to the root of addressing and ending breast cancer.