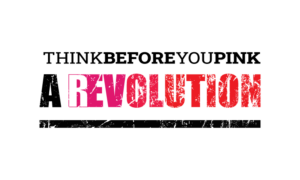 This year’s Think Before You Pink® campaign, “A (R)Evolution” marks the 20-year legacy of our critical take of pink ribbon marketing and culture. “A (R)Evolution” looks back on more than two decades of pink ribbon campaigns and boldly presses forward to expose the common denominator behind the commodification of breast cancer: rampant, unchecked capitalism.

But our Think Before You Pink® campaign has evolved as well. “A (R)Evolution” connects the dots across more than 20 years of pink ribbons and breast cancer fundraising, revealing that the foundational system that enables and encourages profiteering off of breast cancer while framing consumerism as the solution is gross, profit-above-all-else capitalism. These banking cards emblazoned with the notorious pink ribbon are a blatant example of pinkwashing.

The pink ribbon banking cards use the goodwill of the breast cancer community to increase Bank of America’s profits, which fund the cancer-causing fossil fuel industry. Susan G. Komen® must stop banking on breast cancer and divest from pinkwashing! 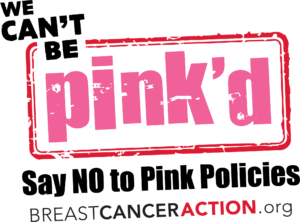 Each October, during “Breast Cancer Awareness Month,” corporate giants, mega-nonprofits, and government leaders claim to care about breast cancer, but do nothing to stop this devastating disease while wearing pink ribbons and making empty promises and proclamations.

This year, we are saying “We Can’t Be Pink’d: Say NO to Pink Policies.” We’re taking on the lack of leadership by the current administration in addressing the breast cancer epidemic!

Our bigger-than-ever campaign is calling out leaders of the Environmental Protection Agency (EPA), the Food and Drug Administration (FDA), the National Cancer Institute (NCI), and the Department of Justice (DOJ). Their pink policies fail to protect people living with breast cancer and increase breast cancer risk for all people, especially for women, people of color, and low-income people. 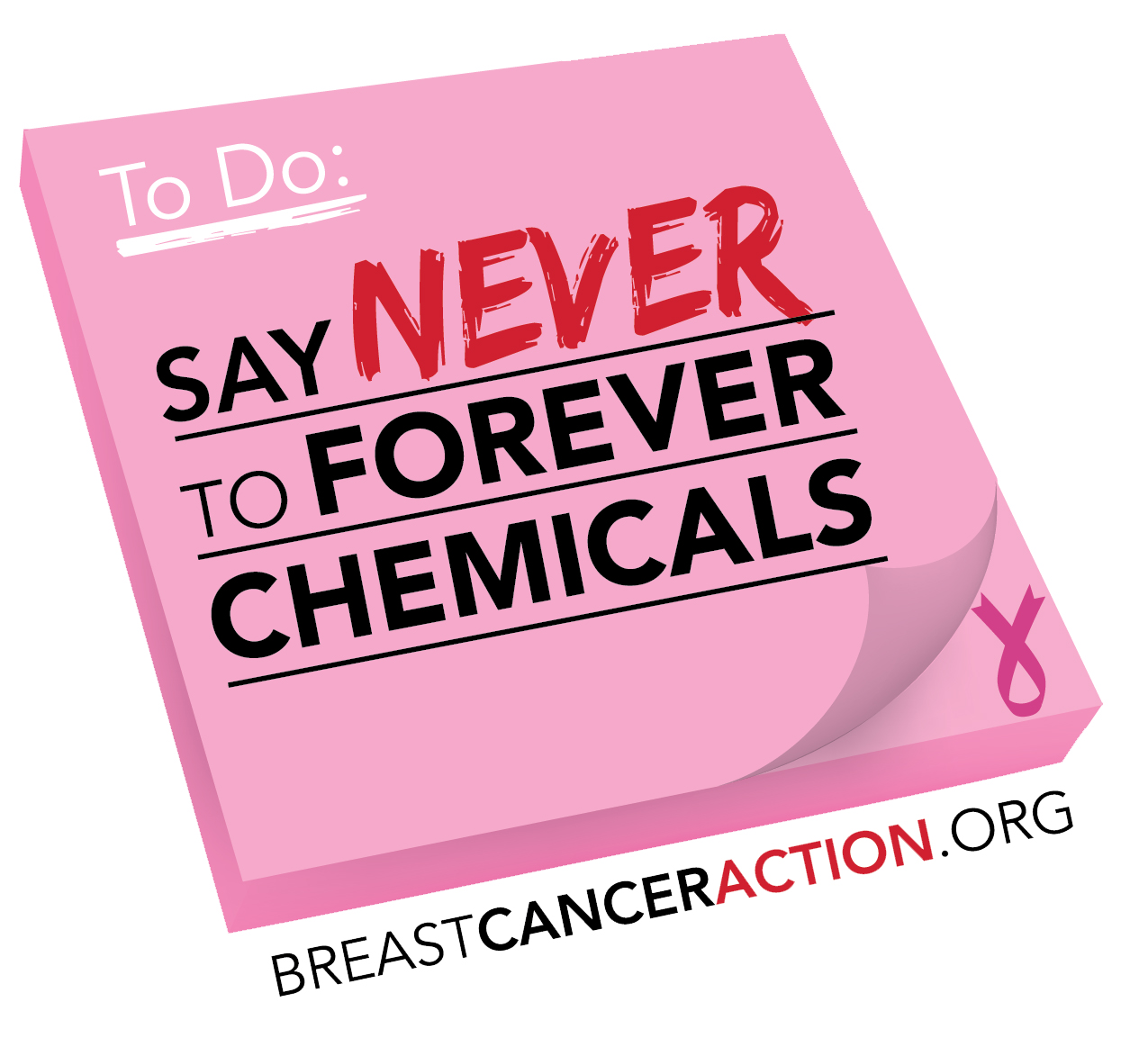 It’s Breast Cancer Industry Month and we’re calling out corporate giant 3M for pinkwashing while continuing to produce and use toxic PFAS. 3M says their pink products are a “reminder of a good cause” even though their toxic forever chemicals may increase the risk of breast cancer. This hypocrisy is called pinkwashing.

Pretty pink ribbon Post-its don’t cover up the fact that 3M’s toxic PFAS may actually increase the risk of breast cancer. For decades, 3M has produced and used forever chemicals that are known to cause some cancers, disrupt hormones, suppress the immune system, and even change the structure of the mammary gland.

This year’s ask was: Join us in telling 3M know that if they really care about breast cancer they need to stop producing, using, and selling PFAS. It’s time that 3M put our health before their PFAS-driven profits! Say Never to Forever Chemicals!

2018: Put the Brakes on Breast Cancer 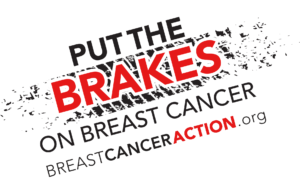 This year’s ask was: Join us in telling Ford to stop pinkwashing and help put the brakes on the breast cancer epidemic by no longer making vehicles that produce exhaust.

On the 25th anniversary of the pink ribbon, we’re angry. Angry that too many women are diagnosed with and die from breast cancer. Angry that women of color and underserved communities are disproportionately burdened. Angry about the exploitation of the disease for profit. And angry that there’s so little to show for 25 years of pink ribbon awareness and billions spent on pink ribbon products.If Estée Lauder is really serious about their self-proclaimed mission “to create a breast cancer-free world,” they will put their marketing, mere awareness, and positive platitudes aside. They will stop pinkwashing and take meaningful action that makes a difference to all women, from all communities who are at risk of and living with breast cancer. Tell Estée Lauder to stop the betrayal. Bee Sweet Citrus and Wonderful Citrus, the U.S.’s largest citrus grower and the company behind Halos® mandarins, are using leftover wastewater from oil corporations to irrigate their citrus—while also using pink ribbons to sell them. We call this pinkwashing.

As this type of food irrigation is set to expand, we believe this is an urgent public health issue because of the potentially hazardous chemicals associated with all oil extraction processes. At least one test of oil wastewater used for food irrigation found that it contained the chemical benzene, a known human carcinogen linked to breast cancer.

This year’s call-to-action was: Tell these agricultural corporationsto stop pinkwashing and stop watering our food with oil wastewater. 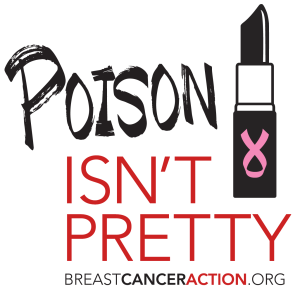 Look Good, Feel Better is a program run by the Personal Care Products Council and the American Cancer Society; they hold free workshops that give beauty tips and complimentary makeup kits to women in cancer treatment—support that some women understandably value while facing a cancer diagnosis.

The downside? Many of the products offered to women in Look Good, Feel Better make-up kits contain chemicals linked to increased cancer risk and some of the chemicals may actually interfere with breast cancer treatment. Breast Cancer Action’s 2014 Think Before You Pink® campaign was a direct call to STOP THE DISTRACTION of pink ribbon marketing and culture. We are calling attention to the countless ways the breast cancer industry, and the culture of pink it has spawned, distract attention away from the bold action we need to successfully address and end the breast cancer epidemic and to achieve health justice for all women in all communities.

For 12 years, Breast Cancer Action’s Think Before You Pink® campaign has held corporations accountable for their toxic pink ribbon products. In 2013, instead of targeting pinkwashers one at a time, we went straight to the source—the chemicals in these products that are making us sick in the first place.

In 2012 during the election cycle we asked our elected leaders, and those running for office, to step up to end the breast cancer epidemic by publicly supporting the 2012 Breast Cancer Action Mandate for Government Action.

In 2011, our Think Before You Pink® campaign targeted a perfume called Promise Me, a perfume commissioned by the giant of the breast cancer movement, Susan G. Komen for the Cure. Promise Me contained chemicals not listed in the ingredients that: (a) are regulated as toxic and hazardous, (b) have not been adequately evaluated for human safety, and (c) have demonstrated negative health effects. 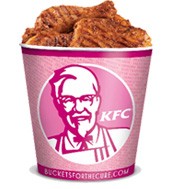 In 2010, Think Before You Pink® focused on “Buckets for the Cure,” a partnership between Kentucky Fried Chicken and Susan G. Komen for the Cure.

In 2009-2010, following on the success of our “Put a Lid On it” campaign (see below), we continued to put pressure on the sole manufacturer of rBGH, Eli Lilly.

In 2008, Think Before You Pink® focused on Yoplait’s pink-lidded yogurt, which was sold to raise money for breast cancer, but was made with dairy stimulated with the hormone rBGH. Together we pressured 2/3 of the U.S. dairy market to go rbGH-free.

In 2007, we focused on car manufacturers who sell cars to raise money for breast cancer, while the cars themselves produce air pollutants linked to breast cancer.

Read more about the 2007 campaign here.

In 2005 and 2006, BCA went back to the basics of the problems of cause marketing, with an online flash file urging people to ask critical questions about products being marketed with a pink ribbon.

In 2004, the Think Before You Pink® campaign focused on the inefficiency of funding breast cancer research by buying pink ribbon products. 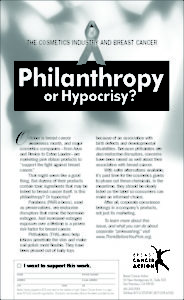 In 2003, BCA coined the term “pinkwasher;” we focused on cosmetics companies that raise money in the name of breast cancer, but manufacture body care products with known carcinogens or reproductive toxins. 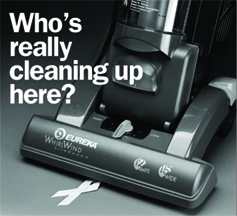 In 2002, we formally launched the Think Before You Pink® campaign. We developed thinkbeforeyoupink.org, highlighting critical questions that consumers should ask about pink ribbon products.