Breast Cancer Organization to March Outside the DNC 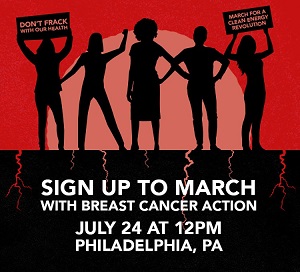 SAN FRANCISCO, CA: Breast Cancer Action (BCAction), the national watchdog for the breast cancer movement, will be leading a march in the streets of Philadelphia the day before the Democratic National Convention to call attention to the health harms of fracking and dangerous drilling. Staff, community members, and allies are marching together in a health contingent as part of the March for a Clean Energy Revolution, which is calling on elected leaders to ban fracking and other oil and gas processes that use chemicals linked to breast cancer and other diseases and disorders.

Fracking and dangerous drilling are urgent public health and social justice issues, which use hundreds of chemicals in its process of extracting oil and gas. These chemicals—25 percent of which are linked to cancer—have been found to contaminate drinking water sources, pollute the air, and ultimately harm people’s health.
“Dangerous drilling and fracking harms the climate and our health. We cannot separate one from the other,” said Karuna Jaggar, the executive director of Breast Cancer Action.

“It is not only the 15 million people who live within a mile of an active well, who are at risk. The entire process from drilling to disposal is toxic; these chemicals cannot be safely contained and they do not biodegrade, or go away. Chemicals used in fracking and dangerous drilling are polluting drinking water, get carried by the breezes in the air we all breathe and seep in to the soil that grows the fruits, vegetables, and other agriculture that are served on tables across the country.”

Since its founding 26 years ago, BCAction has been a leading voice in calling for an end to environmental exposures which increase the risk of breast cancer. “Each year, approximately a quarter of a million women are diagnosed with invasive breast cancer,” said Karuna Jaggar. “Disturbingly, the chance a woman will be diagnosed with breast cancer at some point in her lifetime has risen over the last fifty years from 1-in-20 in the 1960s, to 1-in-8 today. And as the incidence of breast cancer has risen, so too has the incidence of other cancers such as liver, thyroid, brain and pancreatic cancers. Adding to the alarm, the incidence of childhood cancers associated with environmental factors is also rising.”

A recent peer-reviewed scientific paper on more than 650 peer-reviewed studies on drilling and fracking from 2009-2015 found that 84 percent of the studies contained “findings that indicate public health hazards, elevated risks or adverse health outcomes.”

Despite the known health harms linked to many of the 700 chemicals commonly used in dangerous drilling—chemicals which include carcinogens, neurotoxins, hormone disruptors, plastics, heavy metals and radioactive agents—the nation’s politicians are failing to protect public health by banning these inherently toxic practices.

BCAction will be leading the health contingent of the March for a Clean Energy Revolution beginning at Philadelphia City Hall on Sunday, July 24, at 12PM. The March for a Clean Energy Revolution is being held by Americans Against Fracking, a coalition of organizations that support a national ban on fracking. The demands for the march include banning fracking now, stopping dirty energy and attaining environmental justice for all. The march is expected to draw thousands of people from across the country on the eve of the Democratic National Convention.

“For women’s health activists and environmental activists alike, the time to act is now,” said Jaggar. “We must demand that our elected leaders protect the health of communities affected now and take action to prevent further exposure and threat to future generations. We are calling on our political leaders to protect our health, not the profits of the oil and gas industry.”

Breast Cancer Action is a national education and advocacy nonprofit organization whose mission is to achieve health justice for all women at risk of and living with breast cancer. BCAction has a strict conflict of interest policy and refuses to accept corporate funding from companies or organizations that profit from or contribute to the breast cancer epidemic.