We call this pinkwashing.

Join us in demanding that 3M show they really care about breast cancer by ending their production, use, and sale of PFAS.

FOREVER CHEMICALS: FOREVER IS TOO LONG AND TOO TOXIC

PFAS are called forever chemicals because they don’t break down. They have been shown to accumulate in humans, animals, and the environment.

There is no way to avoid exposure to PFAS and 98% of Americans have at least one PFAS chemical in their body. The drinking water of approximately 110 million Americans contains unsafe levels of PFAS, and the chemicals have been found in both breast and cow’s milk. PFAS are also found in food, consumer products, workplaces, and dust. 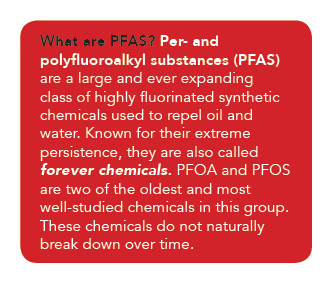 The weight of the evidence shows that PFAS may increase the risk of breast cancer. One of 3M’s own consultants warned that the chemical used for years in Scotchgard “is one of the strongest cancer promoters I’ve ever seen” and interferes with the ability of cells to communicate with each other. PFAS are known to cause some cancers and interfere with normal hormone functioning. In addition, PFAS have been shown to suppress the immune system, which can hinder the body’s ability to prevent rogue cells from growing into breast cancer. Even low dose exposure to PFAS changes the structure of the mammary gland and interferes with breastfeeding.

THE 3Ds OF 3M: DECEPTION, DENIAL, AND DISTRACTION

3M pioneered this dangerous class of chemicals and the company’s fortunes were built on the development, manufacture, and sale of PFOS and PFOA. Today, 3M is a $120 billion multinational corporation with profits driven by the development of newer PFAS compounds. 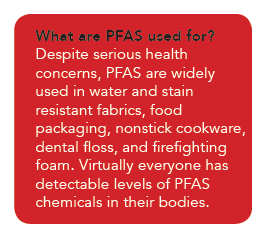 For nearly seventy years, 3M has covered up the risks of PFAS from the public and regulators, protecting their profits at the cost of public health. One lawsuit charges 3M “maliciously conspired” with trade groups to conceal the chemicals’ toxicity. Through a range of delay and deny tactics, 3M prevented regulation, all the while pushing PFAS into new consumer products. As a result, current and future generations continue to be exposed to these dangerous chemicals.

3M has developed newer so-called “short chain” PFAS chemicals to replace PFOA and PFOS. But a new report reveals that 3M submitted reports to the Environmental Protection Agency (EPA) showing health risks for 21 of these newer PFAS chemicals it makes. Despite industry’s claims about the relative safety of newer PFAS, there is evidence that these newer chemicals are not safe for humans or the environment. Instead of cleaning up their business to show us they care about breast cancer, 3M is continuing to contribute to a forever problem.

3M claims to be a good corporate citizen and has run a number of breast cancer promotions over the years, including pink hard hats and tape. In addition to marketing pink ribbon Post-its, 3M is currently selling pink stethoscopes to “help the fight against breast cancer.”

3M says their pink products are a “reminder for a good cause.” But they’re just trying to distract us from the fact that 3M’s toxic forever chemicals cause cancer, suppress the immune system, disrupt hormones, and change the structure of the mammary gland.

EXPLOITING AND EXPERIMENTING ON CANCER PATIENTS

In one study, dying cancer patients were given extremely high doses of PFOA in 2008–2011 despite scant evidence that it would help their cancer or improve their quality of life. Results from this unethical research were never published, and to date, data about the patients’ cancer has never been presented. But instead of disavowing the study, 3M recently harvested the data and paid for re-analysis, which they’re now using to make unsupportable claims that PFOA may not be as persistent as previous studies have shown.

Marketing pink products isn’t enough. If 3M really cares about breast cancer, they will put our health before their PFAS-driven profits.