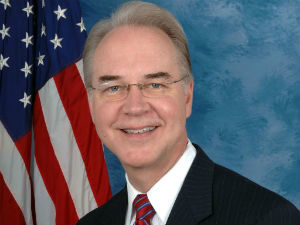 We cannot achieve health justice unless everyone living in the U.S. has access to high quality, affordable healthcare. For many years, we have spoken out about the need for universal healthcare and the Affordable Care Act was an important first step in the right direction, expanding life-saving coverage for millions of people in the U.S.

The U.S. Department of Health and Human Services (HHS) works to “protect the health of all Americans”, with particular emphasis on “those who are least able to help themselves,” by providing essential human services including healthcare coverage to more than 100 million people.

This is a vitally important federal agency that affects the health of millions, which is why we are outraged that President-elect Donald Trump has picked Tom Price to lead the HHS. As the head of the agency in charge of Medicare, Medicaid, and the Health Insurance Marketplace, Price will be charged with writing the rules to implement any changes to the Affordable Care Act (ACA, aka “Obamacare”), which has expanded healthcare access to millions of people. But Price’s track record makes it abundantly clear that he will not protect the health and well-being of all Americans, especially the most vulnerable.

Here are some of the ways Price’s confirmation would harm women at risk of and living with breast cancer:

We need a Health and Human Services Secretary who will ensure that all Americans have adequate and affordable health coverage, including women at risk of and living with breast cancer.

Price is not that Secretary. His proposals put wealth before health, and his anti-science positions fail women. Tell the Senators holding his hearing to do everything in their power to block his confirmation.

The U.S. Senate Health, Education, Labor and Pensions Committee will hold a confirmation hearing on Price’s nomination on Wednesday, January, 18 at 10 a.m. ET.

Starting today pease call members of this Committee in this order of priority:

Here are the Committee members:

Hello, my name is [your name] and I am calling regarding the U.S. Senate Health, Education, Labor and Pensions Committee hearing on the nomination of Tom Price to be the Secretary of the U.S. Department of Health and Human Services.  [If you vote in the Senator’s state, say: I am a constituent of {Senator’s name}].

I want [Senator’s name] to do everything in their power to block Tom Price from leading HHS. As someone [explain how you’ve been affected by breast cancer or why you care about the breast cancer epidemic], access to health care is very important to me. We need a Health and Human Services Secretary who will ensure that everyone in the U.S. has adequate and affordable health coverage, including women at risk of and living with breast cancer. Price is not that Secretary. His proposals put wealth before health, and his anti-science positions fail women. I urge Senator [Senator’s name] to stand up for women’s health and oppose Price’s nomination. Thank you.

NEXT STEP! Click here to help block Scott Pruitt as the next EPA administrator.