We marched with 10,000+ for a clean energy revolution 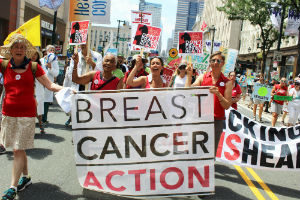 On Sunday, the anti-fracking movement was on fire!

No, we’re not talking about the heat from marching in 95-degree weather. We’re talking about the more than 10,000 people who came to Philadelphia to call on our elected officials to end fracking and other dangerous energy sources on the eve of the Democratic National Convention.

People from all over the country—and even some from around the world—marched for a clean energy revolution, while more than 900 organizations from all 50 states endorsed the action. This massive outpouring shows that we have the people power to end these harmful processes. You can check out some of the media coverage of us in EcoWatch and on WBAI, and some other great pieces on the march in Philadelphia magazine and Democracy Now! 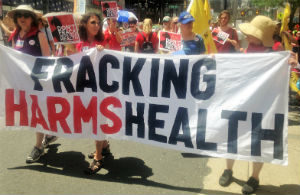 Amidst all the action, we carried your voices loud and proud. At the march, BCAction members joined us in calling for an end to toxic energy sources that use chemicals linked to breast cancer. 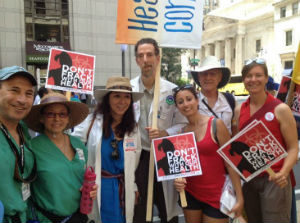 And as the leader of the health contingent for the march, health professionals also joined us in the streets to tell our political leaders: “Stop protecting fracking wealth! Start protecting public health!” 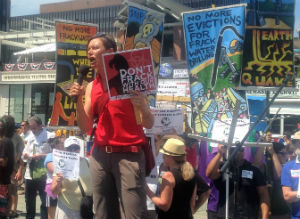 The march ended with a powerful rally, where our executive director Karuna Jaggar spoke to the crowd about why we, as a breast cancer organization, were taking action.

Whether you came out and marched with us, or you support our work in other ways, we thank you. Because of you, we had a huge presence at the march and continue to play a critical role in this strong anti-fracking movement. “Fracking”—an issue that, just several years ago, was considered fringe, has now made its way into the presidential debates and drew its largest opposition of 10,000 this past weekend. And recent polls show that the majority of Americans are opposed to fracking.

But our work is not done. Help us further spread the word by reading and sharing our new brochure on the connections between fracking and breast cancer. We must continue to build this movement for a healthier future.