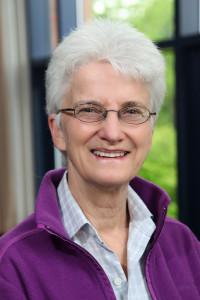 Tell us a bit about yourself and what brought you to BCAction.

I live in Eugene, Oregon where I have been on the faculty at the University of Oregon for the past 32 years.  I’m now an Emerita Professor of Computer and Information Science and almost fully retired. I moved to Oregon from the San Francisco Bay where I lived for many years.  I have a partner, Marie, and a 21 year-old cat, Sammie. I’m a nature girl: I love to hike, swim and kayak in the Cascade Mountains near my house. I also love music and play the violin.

I am a big believer in the “personal is the political” and “our bodies, ourselves”. When breast cancer came to me in 2013 at age 69, I personally experienced the politics of it along with the medical treatment. My younger sister Susanna, who was diagnosed with breast cancer 11 years before in 2002, warned me that cancer treatment was big business. As I struggled with trying to understand the treatment options available to me, what I got from my doctors was really a lack of information about exactly what those options were. I read The Cancer Journals by one of my favorite poets, Audre Lorde, with new understanding and found support for my anger about what was happening. I knew BCAction from contact with former executive director Barbara Brenner and I had made donations over the years. After my diagnosis, BCAction has been one of the important clarifying resources and means of action for me. I’m just thrilled to join the Board of Directors.

I want to give one example of how we as patients are presented with lack of information to make decisions.  My breast cancer was eligible for analysis using the Oncotype DX test at a cost of $4,000—an expense paid entirely by my Medicare insurance.  When I was presented with a two-page faxed result that I could barely read, much less understand, I was told that I didn’t really need to understand the statistics. Yet the statistics were the basis of whether I “should” have chemo or not. This was very disturbing to me. I was being asked to make a decision based on the difference between a 10-year distant recurrence rate of 19% vs. 15%.  I didn’t know what “distant recurrence” meant. I couldn’t reason about 19% vs. 15% in ten years: they seemed very small numbers. My partner Marie, who has a PhD in math, finally found some vague information about how the statistics are computed from the data of a tumor. (For many of these new genomic tests, companies consider the actual formulas used to create the predictions a trade secret.) What I wanted was a discussion of benefits vs. risks tailored to me—a discussion my care providers seemed unable to provide. I also wanted to have evidence-based information—something I discovered is almost non-existent in cancer treatment. I was fortunate in finally working with a wonderful oncologist who was outside the local treatment center. She helped me feel more in control making decisions that were best for me.

Social justice!  I am very committed to grassroots, social justice causes centered on gender, race, and class. During the past 25 years, BCAction has built a reputation as a watchdog for breast cancer. BCAction is one of the only non-profit 501c(3) cancer organizations mostly funded by individual contributions. We do not take any money from corporations that profit from or contribute to breast cancer and therefore can be truly independent in giving out information and participating in activities to support social justice in healthcare. I love that BCAction is a feminist, grassroots national organization committed to social justice and standing up for patients before profits.

What are you looking forward to working on/what do you think are the most pressing issues in breast cancer?

The more I study the medical and biological issues around cancer, the more I appreciate the complexity of the disease(s). There are many forms and types of cancer that we have barely begun to classify. Each has its own mutational basis from many different types of causes.  The fundamental problem of cancer, the out of control rapid reproduction of cells, is a very difficult issue since cells must naturally reproduce. I don’t believe there will be any quick comprehensive cures. Instead there will be a very slow process where each type of cancer is matched to possible treatments.

When I think about what are the most pressing issues in terms of prevention, diagnosis and treatment, here’s what I think about:

Prevention.  I have come to believe that the most pressing issue for prevention is attempting to prevent cancer caused by environmental toxins and chemicals eaten and absorbed by our bodies. I believe that my own cancer could have come from being sprayed with DDT as a child living in the tropics. One of my sisters, who also has breast cancer, was also sprayed. (The visionary biologist Rachel Carson has special meaning for us not only because she spoke out against DDT; she died of breast cancer, too.)

Living in Oregon, I am also exposed to the timber industry practice of clear-cutting that includes the aerial spraying of herbicides atrazine, glyphosate, and 2-4-D (Agent Orange). Linked with endocrine disruption and possibly carcinogenic, this spraying has affected the health of rural communities of people, plants and animals as well as the drinking water for larger populations. Not surprisingly the Northwest has higher breast cancer incidence than the U.S. average. I am working with a group committed to reforming or even abolishing these forest practices here in Oregon. So far it has been an uphill battle and we did not succeed with legislative action this year.

On a more personal basis, I am participating in the NIH Sister Study.  This is a long-term study of the environmental and genetic risk factors for breast cancer with a database of approximately 50,000 initially cancer-free women whose sisters were diagnosed with breast cancer. The really difficult problem with environmental and chemical carcinogens, and other risk factors, is that it is very difficult to show a cause-effect relationship. Exposure to a toxin has a certain probability of causing cancer and often doesn’t present itself until almost a lifetime of accumulation. Toxins also combine with other factors in an individual and the environment in complex ways.

Diagnosis. We have got to come up with better and more innovative methods for diagnosis that do not rely on radiation, i.e., screening by mammography.  It is very difficult to convince people to not have mammograms earlier and earlier in life. There is a huge amount of fear out there now—very justified because we are in the middle of an epidemic—but mammograms themselves have a limited risk-benefit ratio. I would like to see attention paid to diagnostic alternatives for women of different races for whom cancer may present itself in ways that are not necessarily like the norm for white women.  For example, despite increased screening mammography for African American women, their mortality rates have not declined. Death rates for black women were 42% higher (2012) than for white women.  Also, black women have higher rates of aggressive triple-negative than white women.

I also think that the diagnosis of later stage metastatic breast cancer needs research.  As someone diagnosed with early stage breast cancer, I have been told that I must wait and see if it comes to me in other parts of my body and to report anything unusual! What this suggests to me is that we simply have to spend more on the basic research of cancer itself and how it spreads within the body.

Treatment: CO$T, CO$T CO$T.  In general, most of our treatment methods are drug-based chemotherapy. I am incredibly concerned about the cost of these drugs and the monopoly and control that pharmaceutical companies have over determining treatment without evidence-based clinical testing. The average price of cancer drugs for a year is estimated to exceed $100,000 according to a report published in the Mayo Clinic Proceedings by a group of 118 leading cancer experts. They have called for action including new regulations to control the high cost of cancer drugs.  Even with health insurance, your out-of-pocket expenses may be as much as $25,000 to $30,000 a year. Many are left with having to decide between paying for cancer treatment and other vital needs. These costs have a huge impact on lower income people and given 1 out of 3 Americans have a lifetime chance of cancer, we are all at serious financial risk. A change.org petition launched by this report can be found at: http://chn.ge/1DCWT1M

Clearly, we need to develop other methods of treatment that are more sophisticated, rather than the toxic drugs for standard chemotherapy.  As it is now, we barely have any effective treatment for metastatic breast cancer or for other reproductive cancers such as ovarian cancer.  Although immunotherapy seems promising, it has not appeared to be very effective for breast cancer.

Bottom Line. I’m left with the fact that there is a lot of work for us in Breast Cancer Action. I look forward to joining with all the other incredible members who make up this powerful organization.