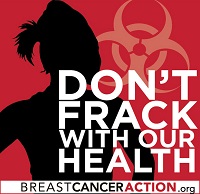 During the last several weeks, we’ve been mobilizing our members to demand that the EPA stop spinning its findings in favor of the fracking industry. While the EPA found several cases of water contamination from fracking in its most recent study, they released a misleading press release that stated that fracking has “not led to widespread, systemic impacts to drinking water resources.” The EPA had a public comment period on the study that ended on Aug. 28.

“By downplaying its findings of water contamination from fracking, the EPA ultimately provided cover for the fracking industry to continue to poison our drinking water with chemicals linked to a variety of health problems, including breast cancer,” said our executive director Karuna Jaggar in a press release. “When the EPA finalizes its study, they need to focus on protecting public health—not the fracking industry—by highlighting and condemning drinking water contamination from fracking.”

As part of the Americans Against Fracking coalition, we collectively submitted more than 100,000 comments to the EPA. More than 1,000 Breast Cancer Action members signed the following comment:

Breast Cancer Action is a national grassroots organization whose mission is to achieve health justice for all women at risk of and living with breast cancer. Our members below signed the following statement for the EPA’s consideration before releasing the official version of the EPA’s Assessment of the Potential Impacts of Hydraulic Fracturing for Oil and Gas on Drinking Water Resources:

As a member of Breast Cancer Action, who recognizes that the breast cancer epidemic is a public health crisis, I am publicly calling on the EPA to highlight the truth about water contamination from fracking when the drinking water study is finalized.

Each year, nearly a quarter million women are diagnosed with breast cancer. Yet a majority of these women (up to seventy percent) have no known risk factors. A growing body of research strongly implicates environmental chemical exposures in the ongoing breast cancer epidemic. In 2010, the President’s Cancer Panel declared: “The Panel was particularly concerned to find that the true burden of environmentally induced cancer has been grossly underestimated [and] … the American people—even before they are born—are bombarded continually with myriad combinations of these dangerous exposures.”

Fracking exposes all of us across the U.S. to toxic chemicals linked to increased cancer risk. The rapid expansion of this industry is a grave public health concern. A 2011 study by the U.S. House of Representatives Committee on Energy and Commerce identified more than 700 chemicals commonly used in fracking—and 25 percent of them are known or potential carcinogens, while 37 percent of them have been identified as endocrine-disruptors.

Already more than 1,000 different cases of water contamination have been documented near fracking sites nationwide. Several of these were captured in the recent EPA report, despite a limited study design based on industry-controlled information.

Yet, instead of highlighting these findings, the agency’s press release about the draft study downplayed health concerns and deceptively declared that fracking has “not led to widespread, systemic impacts to drinking water resources.” The fracking industry celebrated this quote, which provides cover to the fracking industry as it continues to poison our drinking water with toxic chemicals linked to breast cancer.

The public cannot wait until the impacts of fracking on our drinking water become “widespread” or “systemic.” As someone who is committed to addressing and ending the  breast cancer epidemic, I know we need to take action now to stop cancer before it starts.

I urge the EPA not to diminish or downplay the results of the study on fracking and drinking water but rather to take a strong stand on fracking’s true dangers. Our health is on the line.