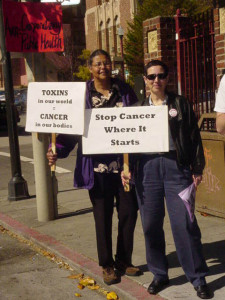 We’ve been calling for comprehensive chemical safety reform for years to protect all of us from exposure to chemicals that increase our risk of breast cancer. The Toxic Substances Control Act (TSCA) is the nation’s main law to regulate chemicals used in everyday products. However, it has not been updated since it was passed in 1976. Now, a bill before the Senate threatens to move us in the wrong direction at a time when we need real reform more than ever.

After years of pressure by activists, the chemical industry knows that the growing call for chemical safety reform is being heard by federal lawmakers. That’s why the industry is working so hard to protect its interests by undermining efforts at real reform and promoting their own industry-friendly bill. Instead of offering the strongest protection for public health, Senate bill, S. 697, would actually make current chemical safety laws even worse.

Tell your Senator that you want real reform to protect public health—not weak, industry-friendly laws that don’t give the EPA the tools they need to do their job.

Urge your Senator to vote NO on S. 697 and not to pass any legislation that doesn’t ensure true chemical safety reform in these ways:

We’ve waited far too long for protection from toxic chemicals to allow our lawmakers to pass a bill that’s a thinly-veiled gift to the industry and a blow to our health.

Tell your Senator NOW to vote NO on selling out public health and to follow these standards to help shield us from toxic exposures linked to breast cancer.