Think Before You Pink® 2013 Campaign Recap: Toxic Time Is Up!

The flood of pink ribbon products touting “breast cancer awareness” are always overwhelming and frustrating, which is one of the many reasons why our Think Before You Pink® campaign is always a welcome relief and resonates with people year after year. People are sick and tired of pinkwashing! This year’s campaign, Toxic Time Is Up really hit a nerve and has provided thousands of us with a way to channel our frustration and make real change to help address and end the breast cancer epidemic.

For 12 years, Breast Cancer Action’s Think Before You Pink campaign has held corporations accountable for their toxic pink ribbon products. Over the years, we’ve campaigned against many of the most egregious pinkwashers – companies that make money off breast cancer by selling products whose toxic ingredients help increase our risk of the disease. This year, as many of you know, we went straight to the source – the chemicals in the products that we use every day that are linked to causing breast cancer and other health harms.

We are proud to report that in just one month nearly 32,000 people from across the country signed our Toxic Time Is Up petition. That’s more than 1,000 people per day during October who joined together to demand an end to pinkwashing by removing cancer-causing chemicals from our daily lives. 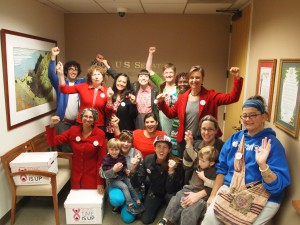 BCAction staff and members deliver your Think Before You Pink: Toxic Time Is Up petition signatures

On November 4th we boxed up all the petition signatures, and then our entire staff, along with members, volunteers, interns and family members, together delivered nearly 32,000 signatures to the office of U.S. Senator Barbara Boxer in Oakland, CA. Sen. Boxer is the Chair of the Environment and Public Works Committee that is tasked with updating our current (and broken) toxic chemical policy. You know that Sen. Boxer is hearing from industry, and now, because of our Toxic Time Is Up campaign, she is hearing from people living with and at risk of breast cancer as the Senate considers the future of chemical regulation in the United States.

This campaign would never have been successful without you. Thank you to everyone who signed the petition, shared it with friends, family and community, took it to the streets to collect signatures, and blogged about the campaign, pushed our message out to their organizations and networks. We depend on you: all of our members, activists, and partner organizations. We need all of you and we are so proud to have stood alongside you in this action. 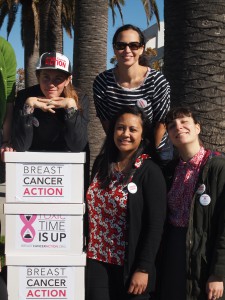 The struggle for meaningful, comprehensive chemical reform is not over, and Breast Cancer Action will continue to demand that decision-makers hear our collective voice and take swift action for public health. The Toxic Time Is Up campaign was barely over when we sent a letter to members of the U.S. House of Representatives Committee on Energy and Commerce Subcommittee on Environment and the Economy in advance of the hearing on Chemical Safety Improvement Act (CSIA) held November 13th. We wrote and posted an open letter in The Huffington Post that outlined our opposition to the CSIA as it is currently written. This letter called upon the committee to introduce significant and necessary changes to strengthen TSCA and protect public health. We then sent this letter directly to key Representatives, identifying our areas of concerns. We don’t yet know when Congress will take another step toward reforming TSCA, so we will continue to keep the pressure on our legislators and demand that they act – sooner rather than later.

We must ensure the passage of a TSCA reform bill that is strong enough to meaningfully protect public health from toxic chemicals. Passing such a bill will represent a tremendous step in the right direction towards preventing breast cancer and other disorders and diseases. Please stand with BCAction to help make this goal a reality. Together, we are building a movement that will create a healthier world for all of us.