A Genetic Counselor Explains How Gene Patents Harmed Her Patients 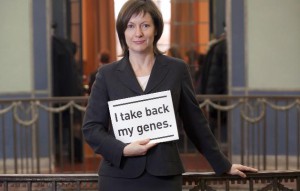 Editor’s Note: On July 13, 2013, the Supreme Court ruled in our favor to overturn Myriad Genetics’ patents on the “breast cancer genes,” BRCA1 and BRCA2. We were proud to be the only breast cancer organization to join researchers, patients, and genetic counselors in this landmark lawsuit. We asked one of our incredible coplaintiffs, Ellen Matloff, to explain how Myriad’s patents harmed her patients, and how things will be different for them in the wake of the Supreme Court’s landmark ruling.

The battle against gene patents ended on June 13, 2013, with a unanimous Supreme Court decision to oppose such patents. Since the decision, many colleagues, patients, and friends have remarked, “I can’t believe they ever allowed a gene to be patented in the first place!” and “Of course you won. It is so clear.” We’ve come a long way, but it wasn’t always so evident to everyone that patenting human genes was wrong.

I’m a board certified genetic counselor, and I came to Yale School of Medicine in September 1995, soon after graduate school, to start a program in cancer genetic counseling. The so-called “breast cancer genes,” BRCA1 and BRCA2, had not yet been found, but the forward-thinking director of Yale Cancer Center, Vincent DeVita, MD, knew that genetic links to cancer would be the wave of the future and recruited me to start a program from the ground up.

My office was a converted supply closet; I could touch all four walls from my chair. One of my first tasks was to write a book chapter on cancer genetic counseling. I read all 83 published articles on the subject (there are now many thousands) and did my best to advise others on how to navigate these uncharted waters. I saw patients for counseling, elicited their family histories, and provided them with cancer risk assessments based on those histories alone. There was no genetic testing for hereditary breast and ovarian cancer at this time, and we were all well aware that these estimates were educated guesses, at best.

Three months later, BRCA1 was cloned, followed quickly by the discovery of BRCA2. Labs immediately began offering genetic testing. Our phones were ringing off the hook. Patients with a family history of breast and ovarian cancers wanted this testing.

We initially sent our patients’ blood samples to the University of Pennsylvania and then began offering testing in-house at Yale. Many of our patients now actually had an answer — not an estimate, not a guess, but a real answer. And although the choices for cancer risk reduction weren’t (and still aren’t) perfect, they felt empowered by the information we were now able to give them and their ability to make educated decisions for themselves. The miracle of accurate genetic testing was finally possible.

Unfortunately, the full benefits of the miracle would not be realized. Myriad Genetics, a biotech company based in Utah, had patented the BRCA genes. The story of how Myriad beat out publicly funded academic researchers by a matter of hours is a story for another day. The bottom line was that the US Patent and Trade Office granted Myriad sweeping control of the BRCA genes, and as I was soon to find out, Myriad was very territorial about the use of “their” human DNA.

A few years after the BRCA genes were discovered, I received a phone call from our lab director, who told me that Myriad Genetics had sent us a cease and desist letter. Myriad was strictly enforcing their patents, and we could no longer test our own patients for inherited cancer risk. All samples nationwide must be sent to Myriad Genetics. An unprecedented genetic monopoly had been born.

We were in the midst of a large research study of women with DCIS to determine if this early breast cancer was associated with mutations on the BRCA genes. The principal investigator had budgeted $1,600 per patient for genetic testing, not the $3,200 per patient Myriad was now charging. The study was stopped in its tracks, because the study couldn’t afford Myriad’s exorbitant testing costs, and we were now barred from doing the testing ourselves. The primary researcher on the study contacted her funding source and was able to procure the extra funding we needed to continue, but it was clear that, as a result of the incredibly high price Myriad had set on genetic testing, there would be fewer studies on BRCA moving forward.

We were assigned a Myriad sales representative who we liked and worked with closely. He hired me to give outreach lectures to clinicians about genetic testing, and we created a special fund with my honoraria to pay for testing for uninsured and underinsured patients. And then one day he told us, sadly, that his own commissions were much lower if test kits came from a genetic counseling center. He needed to recruit outside clinicians to order their own kits. Yes, he understood that they were not trained to order or interpret these test results. It was out of his hands. You see, genetic counselors sometimes advised patients that they did not need BRCA testing, and for every test we didn’t recommend, Myriad lost out on $3,200. This was bad business for Myriad, as they profited directly from every test ordered.

As a result of bypassing genetic counselors in the genetic testing process, waves of patients received the wrong testing or incorrect interpretations of their results from their well-meaning but untrained clinicians (and they still are, to this day). Patients made ill-informed decisions about prophylactic surgery, their clinicians got sued, and Myriad got richer.

And then Myriad Genetics’s print and television ads began. Without oversight from the Federal Trade Commission or Food & Drug Administration, Myriad was not required to state the risks or limitations of genetic testing in advertisements, only the benefits. These glossy ads, in my opinion, were so slick that they could convince a woman to have genetic testing if her neighbor had breast cancer. Insurance companies were flooded with requests for coverage of genetic testing and, in response, began tightening their criteria for testing — which now meant that patients who did need the test were not being able to get it. Medicare limited testing to only those patients who already had cancer. Many patients who needed testing were turned away.

I contacted Myriad. I wrote letters. I set up conference calls. At first, I was given the appropriate, sympathetic response on the other end of the phone. But eventually, it was clear we were no longer on the same team. I tried to rally support in my own profession, among genetic counselors. Much to my surprise, I was told that because Myriad employed so many genetic counselors (many holding senior positions within my professional organization), I could no longer post “controversial discussions” about Myriad’s practices on our national listserv. It was “disrespectful.”

I wrote editorials for some of the finest medical journals in the country and each one was rejected. The editor at one prestigious journal personally wrote me a scathing note about how ludicrous it was to even suggest the banning of gene patents. In fact, he said, my letter was so outrageous that he would not send it out for review.

At about this time, Mary Claire King, PhD, presented data at a national conference, demonstrating that Myriad’s BRACAnalysis failed to identify existing BRCA mutations in a significant percentage of patients. Myriad’s test, the only one available due to their patent, was not finding mutations caused by large deletions and duplications (missing or added pieces) in the gene. I discussed the data with my lab director and asked if he could perform this added analysis for our patients who clearly had hereditary breast and ovarian cancer syndrome (based on their personal and family histories) but in whom a BRCA mutation was not found by BRACAnalysis. Yes, he said, he could perform the analysis, but I would need to get permission from Myriad Genetics. I contacted them and Myriad flatly refused. This would be a violation of their patent.

We waited, impatiently, for six years until Myriad launched their BART analysis for deletions/duplications in August 2006. Much to my dismay, Myriad marketed this improvement on their existing incomplete test as an entirely separate test, for $650! Few insurance companies would cover this added expense. More than 95 percent of my patients walked out the door without BART analysis, although every single patient who tested negative on BRACAnalysis needed it. I knew that some of these patients carried a mutation only detectable by BART and would die because of Myriad’s decision. I was frantic.

I wrote an open letter to Myriad Genetics, explaining that splitting off the BART analysis from their “comprehensive” BRCA test would cost lives. We gathered signatures of some of the most preeminent cancer geneticists from around the world and sent them to Myriad. Myriad never responded.

I contacted several large patent law firms and pleaded my case. Could they please take this case pro bono? Several were interested, but when they checked with their own attorneys, every single one had a conflict of interest with Myriad Genetics or one of Myriad’s backers. I have never felt so small or helpless in my life.

And then, on one very ordinary Tuesday, I received a phone call from a woman from the ACLU named Tania Simoncelli. They knew about the patents and they had resources for a lawsuit. Would I like to be a plaintiff in a lawsuit against Myriad Genetics?

Three people from the ACLU drove from New York City to my office in New Haven, Connecticut. They were sharp; they knew the issues. I thought to myself, “They could win.” Finally, help had arrived.

Before signing the papers, I checked with several of my closest advisors about becoming a plaintiff. Their response surprised and upset me: “You need to check with your employer,” they counseled. “This is a huge risk for you as an individual. You are risking your reputation, your job, and even your personal finances. This is too much risk.” Not one person thought I should join the lawsuit. In fact, many of my colleagues refused to join me.

I was in the process of starting a family and would be the single source of financial support for my child. Could I afford to take this type of risk right now? The answer was clear: No.

But after many sleepless nights, many meetings with attorneys, and looking into the trusting faces of my patients every day, I realized that I didn’t have an option. I had to become a plaintiff. Myriad’s monopoly on the BRCA genes was actively harming my patients, their families, and countless other people I would never meet. I became a plaintiff in the first-ever lawsuit to challenge patents on human DNA.

June 13 was my three-year-old daughter’s last day of preschool. I dropped her off, worked at a coffee shop, and went back for the short end-of-year sing-a-long. We ran to the car together in torrential rain, and then I strapped her into her car seat and hopped into the driver’s seat.

It was then that I heard my cell phone exploding — voicemails, texts, all with one message: We won, we won, WE WON. The U.S. Supreme Court had, in a historic and sweeping victory, unanimously overturned Myriad Genetics’ patents on the breast cancer genes and all patents on human DNA.

The tears started pouring down my face as I drove my daughter home in the pouring rain.

“Mommy, why are you crying? Are you OK?”

“These are happy tears, baby. Today we won.”

To learn more about this landmark decision, click here.