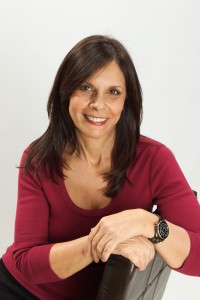 While awaiting my genetic test results, I began learning all I could about my breast cancer diagnosis. When I realized there was a chance the disease might already be in my other breast, regardless of my genetic test results, I chose the most aggressive surgical treatment even before I received my genetic test results. Although the surgeon was confident lumpectomy would be as effective, I wasn’t comfortable with a pre-menopausal diagnosis of lobular carcinoma. I opted for a bilateral mastectomy plus eight rounds of CMF chemotherapy (cyclophosphamide, methotrexate, and fluorouracil).

The cancer hadn’t spread to my lymph nodes, so my choice might seem extreme. When the pathology report of my non-cancerous breast identified several areas of atypia, I knew I’d made the right choice. It’s easy to look back now, but when I walked into that operating room for my mastectomy, there was no way for me to know if I was making the right choice for my health. I couldn’t get the word “mutilation” out of my head, and I wished desperately that someone—the surgeon, the radiologist, or anyone else on my medical team—would just tell me what to do. Ultimately, the decision was left to me. Little did I know how much cancer-related uncertainty was still ahead.

What Do You Do With Inconclusive Test Results?

When I got my genetic test results back, I was told I have mutations of unknown significance on both my BRCA1 and BRCA2 genes. We all have these genes in our body, but certain mutations on them increase our risk of breast and ovarian cancer. As I understood it from the genetic counselor, it was unusual to have the test return inconclusive results on both genes. I discussed my results with the counselor and a prominent medical research doctor who specializes in genetics, who strongly recommended a prophylactic oophorectomy to help prevent ovarian cancer – even though none of us knew whether my particular genetic mutation increased my risk of ovarian cancer. The doctor was concerned about the uncertainty of the results. His advice was to make sure I was being proactive about a situation that even he could not properly analyze.

I knew the breast cancer was estrogen positive and I would be put on an estrogen suppressant when I was finished with chemotherapy. Knowing I would be on medication to stop my ovaries from producing estrogen, it seemed there was no reason for me to keep my ovaries. As soon as my body rebounded from the chemotherapy, I had the surgery. I wanted to reduce my risk factor for cancer recurrence and reduce the risk of developing a second new cancer as much as possible, even if it meant taking extraordinary steps like removing healthy body parts.

Searching for Answers About Cancer Across Generations

My family situation is a mess. My mom was tested immediately after my results were known and she was negative for any mutations. When my sister was diagnosed with breast cancer, her BRCA test came back with the same mutation as me, on just one of her genes. My other sister has not been tested despite the fact that she did have two surgical biopsies. One of them found “borderline DCIS” with vascular involvement. It seems like a waste of time for her to be tested when there is no way to check the results because of the patent. I would want a second opinion by a lab of my own choosing and that is simply not possible.

I’m not at all confident in these test results and there isn’t a thing I can do about it as long as this patent is in place.

I look at my family situation and I see four first-degree relatives with FIVE breast cancer diagnoses. Of those, four of the cancers were pre-menopausal. When I come to terms with the fact that none of us has a genetic mutation known to increase our risk of cancer, I realize there is a possibility we have a mutation that predisposes us to cancer but which has not yet been identified.

What infuriates me is that research into cancer-linked genetic mutations is stalled because one company holds on a patent on our very genes. Thanks to Myriad Genetics’ monopoly, no one else can do research on the “breast cancer genes,” and Myriad has very little incentive to identify rare, indeterminate mutations such as mine. As long as one company is allowed to dictate all uses of MY genes, families like mine will not get the answers we need.

I have a daughter. I have two nieces. For their sake, I’d like answers. If we have a family mutation, I want to know. Having my mother’s cancer recur, not knowing if this was a 25-year dormancy from a pre-menopausal diagnosis or a five plus year dormancy from a very early stage diagnosis has me reeling. My youngest niece is a teenager. She was in tears when she found out about my mother. I know she is afraid, for my mother, my sister and for herself.

My daughter is in her 20s. Just weeks ago, in a very matter-of-fact tone, she told me, “I know I’m going to get cancer one day. I just hope you are not around to see it.” She lives with the uncertainty of her cancer risk, unable to know if she’s inherited from me a very high risk of breast and ovarian cancer, whether she should undergo potentially life-saving surgery to remove healthy organs. My daughter needs answers and she cannot get them.

The fact that my genetic material is patented and no one else can do any research is wrong. Maybe our tests should have been completely redone by an independent facility. That’s not possible, thanks to Myriad’s patent. Maybe a new set of eyes examining these genes might unlock some other mutations. That’s not possible, either.

I can’t sit on the sidelines for this. Too much is at stake and it is too close to home. I’m doing what any mother would do. I want my daughter to have answers. Being in limbo, not knowing and being completely powerless to do anything about it is simply unacceptable.

Join activists from across the country (including AnneMarie) at our rally to outlaw human gene patents on the steps of the Supreme Court on April 15th.