Breast Cancer Action has long offered an independent voice for people affected by breast cancer. We aren’t beholden to big pharma for our funding, so we get to really review the science and provide women affected by breast cancer with solid information so that they have the resources they need to make their own decisions based on their values and priorities. Since launching a free monthly webinar series in May, we’ve offered these webinars:

We’ve scheduled the first of our 2012 webinars. Webinars are advertised through our e-alerts so keep your eye on your inbox.

Additional 2012 webinars will focus on breast cancer health inequities, among other topics. 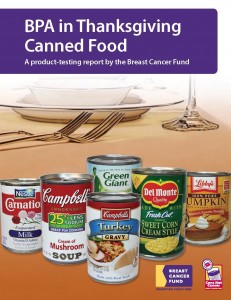 Real change requires not only access to unbiased information but also collective action. Here are some highlights from the past few months:

This summer, we took action with our friends at Breast Cancer Fund and MomsRising to demand that Campbell Soup Company stop using bisphenol A (BPA, an estrogenic chemical linked to breast cancer) in its canned products. BPA’s presence in canned foods is a social justice issue and so in November, we co-released with the Breast Cancer Fund a new report on BPA in canned foods, BPA in Thanksgiving Canned Food. We cannot put the burden of responsibility on consumers—eating safe food products isn’t about individuals choosing BPA-free products. We need systemic change at the federal level – namely, the passage of the Safe Chemicals Act of 2011 to ensure that all people are protected from harmful chemicals.

In October 2011, BCAction rolled out its first-ever Think Before You Pink® Toolkit. The toolkit is an educational resource for activists that is chock-full of information and includes a look at the history of BCAction’s Think Before You Pink® campaign, critical questions for conscious consumers to ask before purchasing pink ribbon products, a quiz (with answers), and instructions on how to write a letter to the editor and get your voice and opinions heard in a public forum. Check out Pink Ribbon Blues author Gayle Sulik’s review of the toolkit and get your own toolkit here.

Since 2007, BCAction has maintained opposition to Avastin’s approval for treatment of metastatic breast cancer because of the drug’s failure to improve overall survival or quality of life and its serious side effects. In November, in concurrence with Breast Cancer Action’s position and the unanimous recommendation of the Oncologic Drug Advisory Committee (ODAC), FDA Commissioner Margaret Hamburg announced the revocation of Avastin for treatment of metastatic breast cancer. We believe this was the right decision, but it certainly wasn’t a victory.  We will continue to advocate for more effective, less toxic treatment for all breast cancers.

On the gene patenting front, in late July a federal appeals court partially reversed a lower court’s ruling in the lawsuit that BCAction and other plaintiffs brought against Myriad Genetics (Myriad holds a patent on the BRCA 1 and 2 genes, mutations of which are linked to an increased risk of breast cancer). In a 2–1 split decision, the court ruled broadly that genes can be patented and that patents on BRCA1 and BRCA2 gene sequences are valid because they apply to isolated DNA, not DNA as it is found in the human body. BCAction’s attorneys in this case have filed a petition for review at the U.S. Supreme Court. We’ll keep you updated about the case.

Raise a Stink! campaign was a huge success

Pinkwashing reached a new low this year with the release of Promise Me, a perfume commissioned by the giant of the breast cancer movement, Susan G. Komen for the Cure. Promise Me contains unlisted chemicals that are regulated as toxic and hazardous, have not been adequately evaluated for human safety, and have demonstrated negative health effects. Together, we took on Komen’s pinkwashing. On September 27, we launched our Raise a Stink! campaign, asking the public to send letters to Komen, urging it to recall Promise Me perfume and sign BCAction’s Pledge to Prevent Pinkwashing.The campaign received fantastic media coverage across the United States in Marie Claire magazine, the New York Times, the Dallas Morning News, the Chicago Tribune, and NPR’s On Point, and was picked up by all the major TV stations, among other media outlets.

Please consider making a year-end donation today. Your gift will ensure that BCAction remains an independent voice and vital resource for everyone affected by breast cancer.

The Source—Fall/Winter 2011 | 12.14.11© 2011, Breast Cancer Action ISSN #1993-2408, published quarterly by BCAction. Articles on detection and treatment do not constitute endorsements or medical advice but are intended solely to inform. Requested annual donation is $50, but no one is refused for lack of funds. “Breast Cancer Action”, “Think Before You Pink” and the BCAction logo are the registered trademarks of Breast Cancer Action. All rights reserved. Not to be used without express written permission.